Tonight we’re having some friends over to help pass out candy (they barely get trick-or-treaters at their house), play a game or two, & have some pizza. We are having a very rainy day today up here and I’m a little thankful that I don’t have a little one to take around door-to-door tonight. 🙂

Today’s recipe is a bit on the side of “Throwback Thursday” as it takes me back to fond memories from high school. Back then, I was very active in not only the music department, but the drama department. I loved to participate on the stage, but as I got older I started to get more hands-on with stage production. The group of people I met while on stage crew are still many of my friends to date, even though it’s been 10 years since I graduated high school (whoa.).

As a high school teacher now, I completely understand what our fearless leader & brave supervisor-adult Dianne meant when she said we were giving her grey hair. I could write, and write, and write about all the hilarity that ensued during those hours I spent after school. But, some stories are best kept amongst “the few, the proud, the crew”. 😉 One of our many traditions was the “crew barbecue” (or as our fearless leader, Dianne called it, the crew picnic). We’d all come in on a Saturday (we’d normally just meet after school) and work on sets, painting, etc., all while having a grand old time goofing around and pulling shenanigans. For lunch, we would fire up a grill and grill out some hambugers. Dianne would bring this pepper relish that she made herself during the summer. 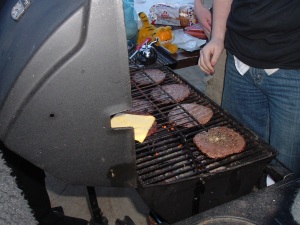 Grilling at a crew barbecue

While I’m not sure if I was the only kid that ate it, what I do know is that for at least three of crew barbecues (we had one for every show, even when it was snowing), I would end up coming home with a jar of pepper relish and proceed to eat with sandwiches, crackers, hambugers, hotdogs, you name it.

I’ve seen Dianne several times since I’ve graduated high school and I’ve actually even met up with her twice since I’ve moved to northern Michigan…it’s a small world after all, and she has a family cabin about a half hour away from us and come up here every once in a while. We have plenty more to catch up on other than stage crew and pepper relish (she had a lot of fun touring our house and giving her two cents on what the original floorplan probably was – I tell ya she is one smart woman).

This past summer, with the exhorbitant amount of peppers in my fridge (about 4-5 different varieties and 30+ to count) I needed to do something with them. And I had a major taste for some pepper relish. So, I got to work doing some research to see what I could come up with on my own…and I came up with something pretty close. It’s a perfect balance of sweet and savory, with a bit of a bite, because I used some jalapenos & serranos.

Inspired by BonAppetit, Diana Rattray, and of course, Dianne 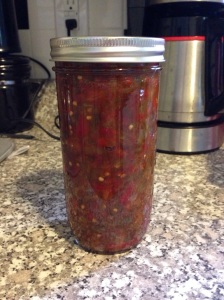 So far I’ve managed to eat this on pulled pork, sloppy joes, and turkey sandwiches. I just can’t get enough! It is awesome. I’m not sure how long this will keep in the fridge, but I’m pretty sure that it will last me for a little while. If you make more than one batch, the processing time is either 10 or 15 minutes – honestly, I don’t remember what I read in the planning stages.

All I can currently think about is how this would also be fantastic with cream cheese and crackers. Mmmm.

I hope you all enjoy your evening tonight, be it with your young’ins, just passing out candy, watching scary movies (not my thing much to my husband’s dismay), playing games, or just relaxing 🙂 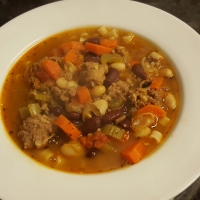